The Netherlands is a small country, but is known worldwide for her perkiness, e.g. our drugs tolerating policies, gay marriage approval and wearing clogs. Now we can add one thing more to that list: The Netherlands is the first country in which citizens, thanks to Urgenda, sue their government because they believe the government does not do enough to stop climate change. In his verdict, the judge ruled that climate change is caused by human actions and that large consequences are inevitable. He ruled that the Dutch government is obliged to reduce CO2-emissions by 25% compared to the CO2-emission in 1990, from the year 2020 onwards. With the steps our government has taken so far, we will only realise a reduction of 17%. 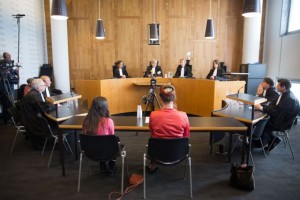 Excitement during the ruling.

What is the political reaction?

The responses vary from the politically correct “we will study the verdict” to audacious comments the judge is wrong. Pretty strange when you consider these comments were made an hour after the verdict and all reports combined total up to well over 5000 pages. Talk about speedreading. Another nice reaction: “The Netherlands is already well on its way, concerning the climate.” In a European context, we only leave countries like Malta and Luxembourg behind us. Do you believe you will ever hear a couch of the national team say that after we finish second to last in a UEFA championship? Sadly, statements like these make it so that the average citizen will have difficulties taking politicians seriously.

The real question is of course: what will our government change now? Will they finally re-invest the 4 billion euros in coal subsidies in sustainable energy sources? Or will they continue their business as usual?

Is mismanagement the only effective environmental management?

If you look at worldwide CO2-emissions from the past decades, you will see two short, downwards trends. One when the Soviet Union collapsed and the other when the last financial crisis occurred. We might conclude that changes that are negative to our economy have a positive influence on the environment. Why? The biggest problem is that companies that profit the most form the current economy, will risk making less profit in a more sustainable economy. Think for example about oil produces. What can they deliver if no more oil is burned? They will protest change, a.o. by denying the seriousness of climate change and by lobbying against laws and policies that threaten their profits. They will claim a sustainable development is bad for the economy, but what they really mean is that such development is bad for their sales. Our government pays too much attention to those claims.

The goal of the climate case is forcing our government to abide to made agreements on the climate and to motivate her to give a positive spin to the current policy. Precisely investments in new, sustainable techniques and changing to a carbon free economy is the big stimulant that will improve our large scale economy. And a big step forward into a healthier society!

What has this story to do with corals?

Simple: increased atmospheric CO2 will lead to more CO2 in the oceans. This makes seawater more acidic and that has huge consequences for all marine life that grows cartilage and carbonate based skeletons, like coral. In more acidic water that growth is more difficult and takes more energy. This makes corals susceptible to disease. Acidification can lead to the extinction of corals. 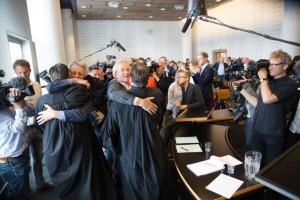 Congratulations being exchanged after the verdict

On behalf of CoralGarderning, future generations and many others, from the bottom of our hearts:

Thank you, Urgenda and judges for this historical verdict!

This climate case, filed by Urgenda and Roger Cox, is picked up in other countries as well. For example, a new case was filed in Belgium and in Australia work is done on the preparations for another case.