Who’s afraid of the Great White? Almost everybody. Why? Because of that movie classic “Jaws”. In reality the Great White is not as fearsome as one may believe. Movies tend to have a large influence on us. Larger than you would expect. Animation movies can also influence us: after the release of Finding Nemo, clownfish popularity surged. The sequel Finding Dory was released a couple of days ago. 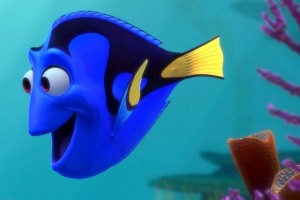 First a little background info on Dory. Dory is a Paracanthurus hepatus, one of the 70 or so species of surgeonfish. These surgeonfish live in coastal waters, coral reefs or rocky bays. You can find them between about 2 and 40 meters. Adults are up to 30 cm long. They live solitary, in couples or in small schools of about a dozen. Very rarely they form larger schools. Dory uses her sharp teeth to scrape algae from rocks and corals. This not only sustains her, but also benefits the wellbeing of a coral. Grazing is what keeps algae at bay, preventing them from overgrowing the coral reefs. The reef provides shelter from predators like tuna, sharks and groupers. 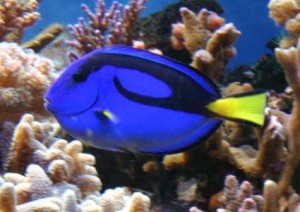 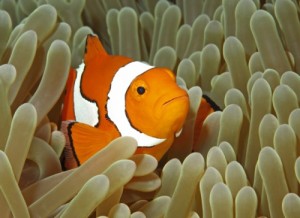 As we mentioned before, many more clownfish were sold after Finding Nemo was released. About half of them were taken from the ocean. The other half was bred in aquaria. If Finding Dory has the same consequences as Finding Nemo, the sale of this species of surgeonfish will peak. Unfortunately Dory will not (yet) breed in captivity, which means that many will have to be caught in the wild. Most American marine fish for the aquarium trade are caught with cyanide. Cyanide sedates fish, making them easier to catch. But it also damages corals. For each caught fish, about 85 cm2 (about 15 sq. inches) of coral reef is destroyed. That’s something we should be worried about. Less Dories also means more room for algae to grow and overrun corals.

Therefore it is important to keep Dory where she belongs: in the ocean. A petition has started to move Disney to give some attention to this issue in their trailers etc. Sign this petion to keep Dory in the ocean and to save reefs!

Luckily this long awaited sequel can also save our reefs. After Finding Nemo, people had a better understanding of our impact on oceans. Finding Dory can also provide such an improvement of awareness, as long as we can enjoy Dory in the ocean instead of in aquaria. So go enjoy this movie and experience this surgeonfish in its natural habitat, the Indo-Pacific ocean!