My diving addiction started quite slowly in 1997. But until 2005 it was with great gaps between the different diving vacations. Then my addiction got out of hand and I have regularly travelled in the Caribbean and South East Asia. I’m lucky to have visited many very beautiful places and be totally impressed with all the colors, variety and visibility of underwater life. Unfortunately, I also saw the damage done to this piece of nature. In addition, I have a broad interest in science and like to read a lot about it. Combine those two interests and you’ll soon hear frightening stories about where it’s going with our world.

But, what can you do as a single? Then you come across two hyper enthusiastic types on the DuikVaker 2015 that tell you exactly how you can help. Initially only as a donor but when Frank and Vera asked for volunteers later that year, I could of course do nothing but take that next step. So far, I have become involved with the Dive Professionals of 2016 and 2017 and a few other events. In addition, I’ve een sparring with the rest of the team about entering into partnerships and setting up efficient communication methods.

Now a short trip to Koh Tao is on my schedule, to actually learn how to grow reefs and breed coral. And yes, maybe I will start a project somewhere. There are already several organizations that have shown interest and I’m looking forward to a potential project in Indonesia. Hopefully later more on that. 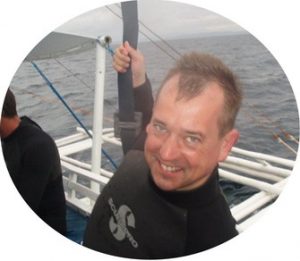