“Could you make an artificial reef of this scrap metal ?” Owen of Mimpi Indah Resort asked. We have been asked to restore a reef damaged by dynamite fishing, in Indonesia. Now we are a few weeks on Bangka Island to make an inventory of the damage and whether restoration is possible. They are already building artificial reefs, see Coral Day 2018, but there is a lack of knowledge and manpower to take a big step. The idea is to make an inventory now and come back in May 2019. Then we will design and build a new reef and train some people, so they can independently maintain the artificial reefs. It is also the intention to teach at local schools about the ocean and coral reefs.

It would be nice to make a statue during the weeks that we are here. The scrap metal consists of a galvanized gas pipes, rebar, and a small iron oxygen tank. A simple question that posed an interesting challenge for us; what could we make? The tank was the key, it gave the inspiration to create a diver. After an extensive brainstorming session, the first design was sketched on paper.

In order to get the dimensions of the diver right, we used Veran as a model. However, due to all the current discussion in society around gender identification, we decided to make the dive gender neutral.

We set out in good spirits to build our diver, however, soon we found that it was not so simple as we had hoped. The gas pipes were very difficult to bend into a desired shape, and welding two different metals together in an art unto itself. After practicing and consulting digitally with our welding specialists in the Netherlands, we mastered this aspect of welding, even with the wrong electrodes!

On Coral Day the diver was revealed to the public. An unexpected bit of testing and quality control took place, usually it is the children who climb all over our artificial reefs, but this time it was an Indonesian woman who knew a good bench when she saw one.

The children loved being the “dive buddy” of the diver; wearing their self-painted traditional diving goggles, they lay on the table next to the diver, dreaming of adventures in the underwater world. And so a name for our diver became quickly apparent: “Buddy.”

After Coral Day Buddy is baptized in the sea. With neither theory, nor diving lessons, it went into the water and found a nice spot on the reef in front of the Mimpi Indah Resort. Buddy has a basket in its hands, to show that they are always tending to the coral, coral gardening. Buddy swims from the Domus Hippocampi, placed on Coral Day 2018, to the pyramids the had been sunk the year prior.

As usual, we plant various coral on Buddy in the subsequent dives. We notice that several fish have already taken up residence in Buddy’s base. Every time we meet Buddy, we check to see if the fish are still there, and if more are moving in, the population increases in just a matter of days. Such an fascinating sight!

I wish I could peer into the future. How will Buddy look in 5 years, in 10? Next year in mid-May, we will return to Bangka to start repairing the damaged reef by building a new reef and transplant coral on it. 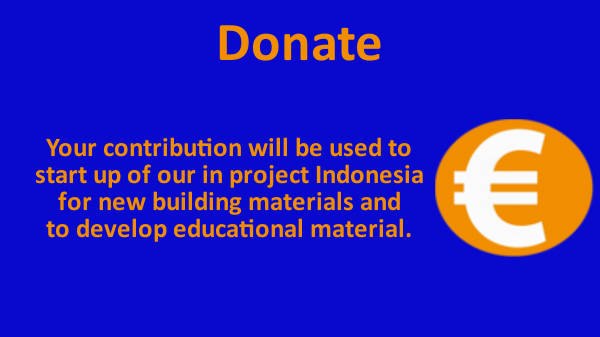